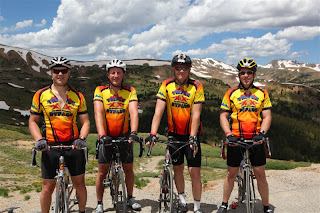 I'm a little late posting but better than never. We had great 2009 Triple by Pass (TBP). We had a fast group and slow group. Fast group was Me, Craig, Berk, James, and Dan (supported by Craig's dad Stan). Chase group Mike T, Matt T, and Johnny supported by Erin. Logistics were easy this year with Stan as dedicated support. We started at 6:00am and were biking by 6:15. We passed Matt right out of the chute. We ascended the first climb pretty much together. James slipped out of rest stop before we new it. Stan meet us in Idaho Springs which was new stop for us. It was nice to ditch the jackets and gloves right after the climb. Stan missed Georgetown so our next stop was Loveland. We dropped Dan early in this stage, Dan's training was minimal at best this year. Craig, Berk and me powered up to Loveland. We passed a ton of riders thanks to work of Craig and Berk. Dan caught back on at the Loveland lunch stop but no sign of James. After some tasty pickles and a V8 we started to attack the final pitch of Loveland. Craig was on fire and we didn't see him till the top. I sucked Berk's wheel for as long as could and I dropped off on the last left hand swithback. I gained some strength as I approched the last right swithback. The grade back off a bit and bridged the gap and made back to Berk. We rode together to the top. Swan mtn killed me, luckly it's only a couple miles. Peanut butter Nilla cookies were a hit at the Dillon rest stop. The copper mtn bike trail was good, with some very light rain near the end. Berk hooked on to a Tri-Chick who pulled us most of way. We were definitely in the passing mode. We put down some Ibprofins and Red Bulls at copper in preperation for 6 short miles to the Vail pass. Berk and I dropped Craig early in the climb, but not on purpose. I felt pretty good up the last climb, much better than Swan and Loveland. Craig was 2 minutes back and Dan was about 10 minutes back. Still no sign of James. We had some good rain on the lower decent to Vail.
We finished just under 10 hours with 6:22 of actual riding time. Our fastest triple in the 7 years we have been riding it. James finished 15 minutes before us. He stopped less and rode more. Mike Tall formed his own chase group which was about an hour ahead of Matt and Johnny. They finished a couple hours later and hit some big rain on the Loveland and Vail descents. 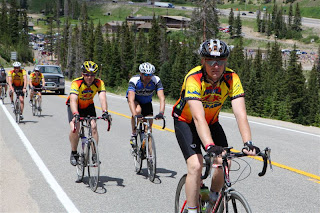 Posted by Thinair Boy at 7:30 PM No comments: