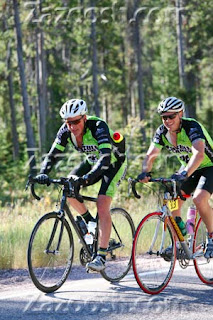 We had our traditional pre-lotoja dinner at Kamin Thai restaurant, with Mike Tall and Erin. Berk and I raced the master 35+ category which left at 6:31. Mike Tall and Don went out with the fun class at about 5:50. We experienced good weather all day, with starting temps in the high 40's. I was expecting a faster pace to Preston but it was still about 4 minutes faster than last year. We touched down for about 1 min in Preston. The little hills outside of Preston were pretty easy, I remember my first few years these hills chewed me up and split me out back. We had a slight head wind(east wind) going up Strawberry. We rode our own pace and kept ahead of last yrs pace. I took a pee break in the National forest sign, we only took water hand ups at the strawberry feed zone. We had a good fast pack going to Montpelier, pace line style where we only pulled at the front for about 20 seconds. I took down a V8 and Pringles with a yogurt in my pocket. I always ate a cliff bar on the descents. We were greeted with a head wind all the way up Geneva Pass. In year's past we always had a nice tail wind, maybe Mike Tall caught a tail wind here? Luckly, we had a tail wind when we turned north on 89. I took a quick stop at the Alred feed zone. I was 5 minutes faster on the KOM over last year and I felt good all the way up the Salt river pass. Berk was suffering up the climb, I waited about 4 minutes at top for Berk. Don joined Berk and me on the decent into Star Valley. Where was Mike Tall, probably in front of us. Our pack was a fast one to Afton, we dropped Don around Smoot. We were on still on target for 10:40 pace. We had a big pack, about 30 by the time we approached Thayne. I was feeling strong and I was able to accelerate with the main pack as it was tricky passing slower riders with the rumble strips. Berk got stuck at the end of one of the pack breaks as we approached Alpine. Alpine was the first time I had seen Janie since I passed here going up Strawberry. Maybe we passed Mike Tall and didn't know it. The traffic was extra heavy this year with our later start time and Lotoja had about 1600 riders this year. I took a v8 and yogurt and decide to go without Berk. I was a few minutes ahead of my 10:40 pace.
There was the usual tail wind up the snake river canyon. I was able hook on to another pack about 1/2 mile up. Some were fresh relay riders but I was feeling good the whole way to Hoback. I had a pee urge to stop at Hoback but I decide to keep going as some of relay riders were not going to stop. I was able to hook up with a couple cat 4 riders and we kept a healthy pace to Jackson. As we crossed the snake river coming to Jackson the next 2 hills were killer. We had a pack of 6 and we all suffered up the little hills. It was beautiful sight to be coasting down the Southpark Road. As we crossed under tunnel and back on the road our pack was getting smaller. I was feeling good and knew I had to keep a strong pace to finish with 10:40. We crossed the Wilson bridge and there was me and 2 other cat 4 riders. We all wanted to get this over and we just kept the speed as each of us took our painful turns at the front. I love finishing strong and this was fun group. As the road came out of the trees and we catch our first glimpse of the finishing line. We pushed hard and I finished 10:40:13. Looking at my split times which were ranked this year, the last 30 miles my pace was 97 out of 1000. Berk finished 11:30 overall. His heart rate was 15-20 beats higher than mine the whole day.

This race I never experienced the downs like past races. The Geneva climb was the hardest part with the head wind. I reached my goal down to the minute is a pretty wild. Beating that 10:00 mark still seams a long way off. Great way to end the road cycling season. Time to CX and start training for the Ironman in May.
Posted by Thinair Boy at 3:26 PM No comments: