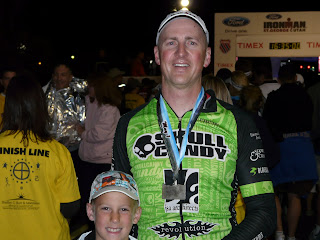 Ironman is one huge production. There were 2,400 athletes participating in this event. Check in was Thursday where I received my number 1667. Had the number airbush tattooed on my shoulders and my age on my left calve. I didn't sleep much Thursday or Friday night. Friday we dropped the bike at Sand Hollow. I've never seen so many bikes in one place. It was a sea of bikes. There was roughly 12 million dollars worth of bikes in the size of a football field. 2,400 bikes at $5,000 per bike. I took a swim to test the water. Water was 59 degress and decided to go with my short sleeves and a rash guard. I wanted the better shoulder movement.

I later dropped off my T2 (second transition) bag which had my running shoes and clothes. Twice the logistics of smaller triathlon. The swim is 15 miles from the run start/finish which is in downtown St George. They don't allow any support from friends or family during the race. They give you 2 bags to place any special food or drink you may want in addition to the provided food which is Gatorade, Power bars, Power gels, bananas, and water. I placed a drinkable yogurt, V-8, and cliff bars in my bike and run special needs bags.

I got may an hour or two of good sleep Friday night. I was up at 3:45 am and had breakfast (oatmeal). Took the hotel shuttle bus to Main Street. Then dropped off my special needs bags and loaded up on the school bases at which took us to the lake. Everyone was pretty quick on the buses. We arrived at the lake just a little light was filling the sky. Winds were calm, sky was clear, morning temps were about 43 degrees so it looked like great day for weather. I checked my bike and pumped up my tires. Big thanks to my friend Rory, who had pump. They moved us down the beach and cannon went off at 7:00am. Was about 50 yards from the start line when the cannon went off and away I swam. I looked back it seemed like half the people were still coming down the beach as I crossed the start line in water which was about 100 yards from the shore. The swim was less crazy as I had though. I stayed in middle of the pack to the first buoy, I would have the occasional touch of another swimmer every couple minutes but it was easy to get in a rhythm and kept my head down. The coldness of the water seemed to go away after 10 minutes. I have neoprene cap and booties. At times it was kind of like a dream, I could see helicopters flying above the water, but with my ear plugs and cap, I could not hear them. The second turn buoy came pretty quick. The last leg was long. I didn't want to stop to see where I was so just kept my head down kept swimming. I was getting more tired mentally than physically as I was approaching the last turn buoy. Made the turn, and I could see the boat ramp, Yahooo. It still felt like an eternity to swim the last 1/2 mile. I passed the boat dock and tried touch bottom and I almost got a charile horse in my calf. I'm not trying that again, keep swimming. Walked up the ramp and crowds of people cheers were terrific. They striped my wet suit at the top of the ramp. Janie was there and she got nice pic of me in my speedo.

The air was chilly without wetsuit. It took a while to get dressed. My hands and arms were very cold. The volunteers were great. I could not get my socks on to save my life. I put my socks in my pocket and biked sockless for a couple hours. I came out of the changing tent and most of the bikes were gone.

The bike was long. I took my time and enjoyed the ride trying to save my strength for the run. With 30 miles to go on the bike leg, I realized I was going to cut it close on the 5:00pm bike cut off time. I turned on the after burners and powered it home. Made into the transition area with 10 minutes to spare. 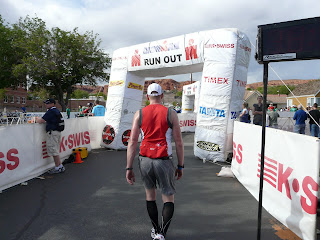